Home care workers want a COVID-19 jab – with around one third of England’s workforce already vaccinated – but providers face “frustrating” vaccine delays due to a postcode lottery, a care leader warns. 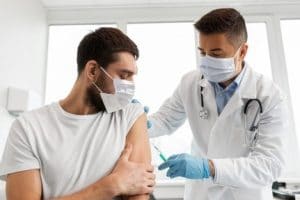 As of 2 February, 32 per cent of England’s home care workforce have received a COVID-19 vaccine, according to the UK Homecare Association’s (UKHCA) poll of 379 domiciliary care providers employing 27,210 care workers.

‘Clear evidence of a strong willingness’

Jane Townson, the chief executive of the UKHCA, wrote in a blog: “There is clear evidence of a strong willingness on the part of most home care workers to be vaccinated. This is a really encouraging start.

“Given the numbers of staff involved and the extremely short period for these workers to obtain vaccination, it is to the immense credit of everyone concerned, including local government, central government, the NHS, GPs, primary care networks and employers that this has been achieved.”

However, Dr Townson warned that despite signs of home care workers’ willingness to be vaccinated, vaccination rates vary significantly between different local authorities.

Skills for Care estimates there to be 715,000 people working in the home care sector compared with 680,000 in the care home sector, with home care workers harder to reach because they are dispersed in their communities.

The results of the UKHCA poll (conducted from 27-29 January), revealed some home care bosses reported almost all their eligible staff have been vaccinated, whilst others said none of their staff had received a vaccine.

The UKHCA chief said: “Even in areas where councils are doing a really good job, a proportion of providers in the local area have still not heard anything from their council. This is extremely frustrating for care workers and their employers”.

One home care boss said: “We were missed off the initial email list as a private provider. It took me six days to find a contact who was responsible for the roll out for domiciliary care vaccinations.

“When I returned the forms I had to chase it up as they then stated they didn’t receive my email although I attached delivery receipts to it and could see it had been delivered.

“I had a phone call to send details over, but heard nothing… I sent them the details again, and a week later still nothing. We received an email to send a spreadsheet of all staff eligible and their NHS numbers – we got it back to them within 24 hours – this was weeks ago and we have not heard anything since.”

The poll results revealed live-in care services face ‘additional challenges’ to obtain vaccinations for staff. This is because care workers are typically working with clients in a different local authority area from where their employers’ office is situated.

The government has promised all care workers will be vaccinated by 15 February.

Dr Townson warned: “Based on the findings of this survey, meeting the government target could prove a challenge at the current rate of progress in some areas.”

Overall, 79 per cent of home care bosses responding to the poll, said they had been contacted by councils where they are based.

A lack of contact experienced by other home care providers comes three weeks after the government published its Standard Operating Procedure for the roll out of vaccinations to community-based care workers.

The UKHCA chief said she is working with local government, central government and NHS England to make sure providers can identify themselves as having workers who need vaccinating.

Dr Townson is urging local authorities in England to contact all eligible providers of domiciliary care in their area “without further delay” and publish “easy to find” contact details for their vaccination teams on their websites.