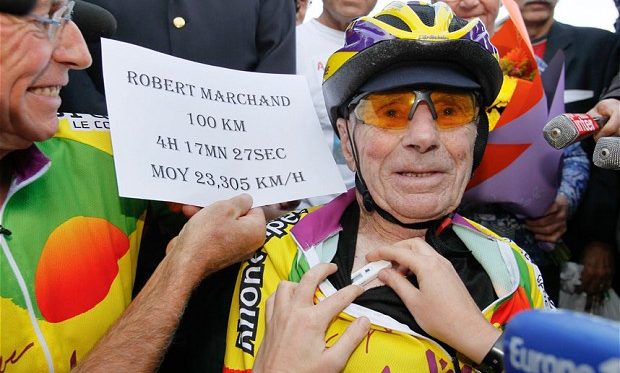 At Home Care Preferred we’re all about supporting people, be it our clients, the local community or individuals who deserve to be recognised. That’s why this year we will be acknowledging amazing people each week who have gone above and beyond. This could be through charity and community work, a personal achievement or anything in between.

To kick things off, our first ‘Amazing Person of The Week’ for 2017 is French cyclist Robert Marchand.

He managed 14 miles at the national velodrome, which made him the fastest in this new category for riders over 105.

He admits he could have improved his time as he missed a sign showing that he had 10 minutes to go.

“My legs didn’t hurt,” he told BFMTV. “My arms hurt but that’s because of rheumatism.”

“I’m not in such good shape as I was a couple of years back,” he told AFP news agency.

Mr Marchand attributes his impressive level of fitness down to diet (lots of fruit and vegetables, a little meat, not too much coffee ) and an hour a day on the exercise bike. He has also competed in gymnastic at national level and tried his hand at boxing.

He has led a varied life. A prisoner of war in World War Two, he went on to work as a lorry driver and sugarcane planter in Venezuela, and a lumberjack in Canada.

“I am not here to be a champion. I am here to prove that at 105 years old you can still ride a bike,” he said – he’s most certainly a champion to us..